Whatever the channel your users come from to convert, the first step in measuring your business success is actually defining WHAT you want to measure, and implementing it as a “goal/conversion” in the platforms you’re using. That’s the “easy” part. Then comes the step where you need to analyze the conversion tracking data in front of you, which will enable you to make informed decisions about future actions.

And that’s where it gets tricky…Why?

You discovered that the number of conversions tracked on one platform doesn’t match the number shown in another platform! Data discrepancies between platforms are actually quite common and can be caused by a wide variety of factors.

For this analysis, we will also generally disregard the influence of ITP, GDPR, and anti-tracking tools. We’d rather focus on the factors on which you have more hold on, and are platform-related. For putting conversion tracking in the larger context of today’s challenges, we suggest you read this article on measuring digital performance.

What differences and why?

The most common measurement differences between platforms, in general, are caused by:

When a user interacts with your ad (click or view), Google Ads will store a cookie that contains information about the interaction. Then when that same user converts on your website, the conversion tracking tag you installed reads this same cookie and sends it back to Google Ads with the conversion information.

Let’s go into detail on the 3 common measurement differences between the 2 platforms.

For example, let’s imagine a user sees your ad and clicks on it on Monday but didn’t convert on the website until Saturday. The conversion dates will be the following on each platform:

This process is called Conversion Backfill. It happens pretty often that people need more than one day to finalize a purchase or submit personal information online. In monthly reports for example, when an ad click happens at the end of the month but the conversion happens in the next month, this can cause some (minor) discrepancies between Google Ads and Google Analytics data.

Attribution and de-deduplication of conversion

Google Analytics uses a “Last Non-Direct Click” model by default (in the main reporting views), but it’s configurable in the Model Comparison Tool. This model doesn’t take into account direct-to-site visits, and it attributes the conversion to the last channel that drove the conversion. This means that all traffic sources are included in the model but only the last touchpoint gets the credit for the conversion. However, as mentioned above, the attribution model is configurable in the Model Comparison Tool (In Google Analytics, go to Conversions -> Multi-Channel Funnels).

In that section, which enables multichannel reporting and attribution of conversions, you can change the attribution model and see different results for the same conversion. In the image below, we show an example where we compare the Last Non-Direct Click model vs. the Time Decay model for all conversions in the last 30 days.

You can see here that the goal completion counts are different depending on the attribution model. 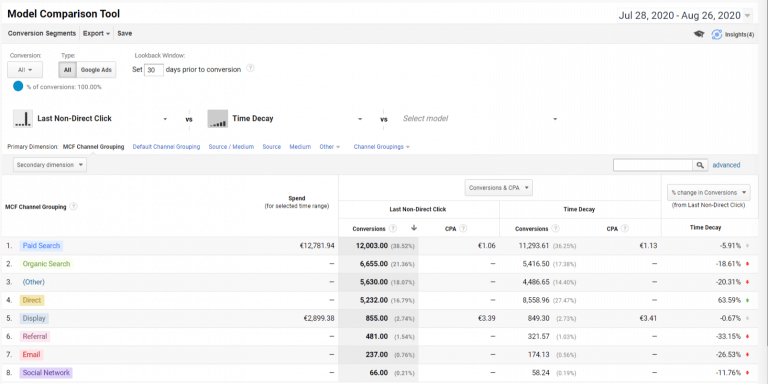 Note: If information about a channel source can’t be found (removed cookies, ad blockers, new user), then Google Analytics will attribute that conversion to “Direct”.

Let’s take an example to illustrate.

A user makes the following journey before converting:

Google Ads conversion tracking can either be set up at the account level or using cross-account tracking (at the MCC level).

Let’s illustrate with a nice example provided by Google:

“Assume you have two Google Ads accounts (account A and account B) and you have identified the same action as a conversion for each account by adding the appropriate Google Ads Conversion Tracking snippet for both accounts to the page and designating it as a Goal in Analytics. Next, assume a single user clicks on an ad from the first account (A), then clicks on an ad from the second account (B), and finally converts. Each Google Ads account would report a conversion, even though it was a single user. According to the default Analytics attribution methodology, this would only be counted as one conversion and it would be attributed to the campaign from the second account (B) since that was the last interaction before the conversion.”

If on the other hand, both accounts A and B are managed by a common manager account (My Client Center or MCC) and use cross-account conversion tracking, only one conversion will be counted and will be attributed to the second account based on the last-click model.”

In Google Ads, you can choose to count either Every or One conversion for each conversion action (see image). This also applies to conversions imported from Google Analytics. This setting can be found in Tools & Settings -> Conversions -> column called “Count”.

What do they mean?

This setting can be changed for each conversion action.

In Google Analytics, each Goal can only be counted once per session. A nice explanatory example given by Google’s Support page makes this concept clearer:

The contrary can happen as well if, for instance, the same conversion happens several times in different sessions. In that case Google Analytics will track several completed goals.

You now have a good idea of what attribution and de-duplication are.

So you’ll guess correctly that Facebook will only have a view on Facebook impressions and clicks, so it will of course attribute conversions it records either to your campaign, or to nothing in case the user wasn’t in contact with your media, or deleted cookies, etc

Campaign Manager, on the other hand, can in theory track almost everything. So it is technically right to assume it can attribute conversions most accurately (depending on your model of course).

On some specific topics, choosing a platform really feels like this: 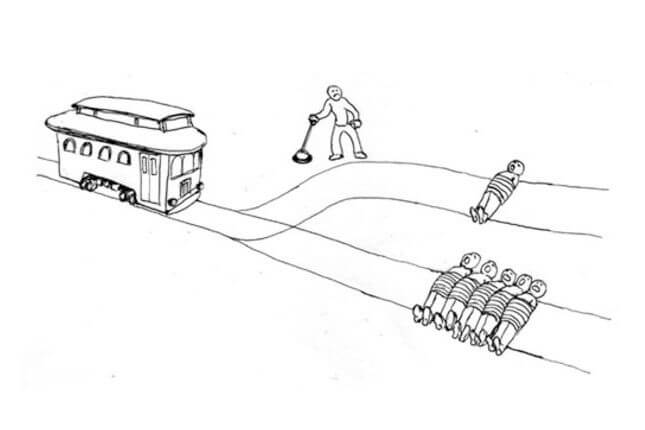 Campaign Manager has 2 types of tags, each with different counting options

Retargeting tag: will trigger on any event you want, like a page view or a click. Depending on your conversion, this can of course be used as a conversion tag

The sales tag same as the retargeting tag, but they include built-in [Order ID] and [Value] variables, which will allow the website to pass data to the Campaign Manager

For Facebook, there is a striking lack of documentation regarding Facebook’s method of counting conversions. At this point, it is difficult to convey something other than rumor. The more recent info on that topic which we could find dates back to the end of 2018, and concludes that Facebook will count every conversion and that you may, for example, record page refresh as new conversions.

This last bit is not extremely technical and goes for all platforms.

Don’t forget to check that you compare tools set up with an identical time zone. If you split conversions daily, and the two tools you compare are set on New York and Timbuktu, well you see where this is going.

There is no right way or definitively exact way to track digital. It’s a hard truth and not very convenient in our line of business, but it won’t go away soon. There are just too many factors to account for, and digital is ever-changing.

In the case of conversions, the 2 main reasons why you look at them are reporting and optimization. Your need will dictate where you get them from and how. 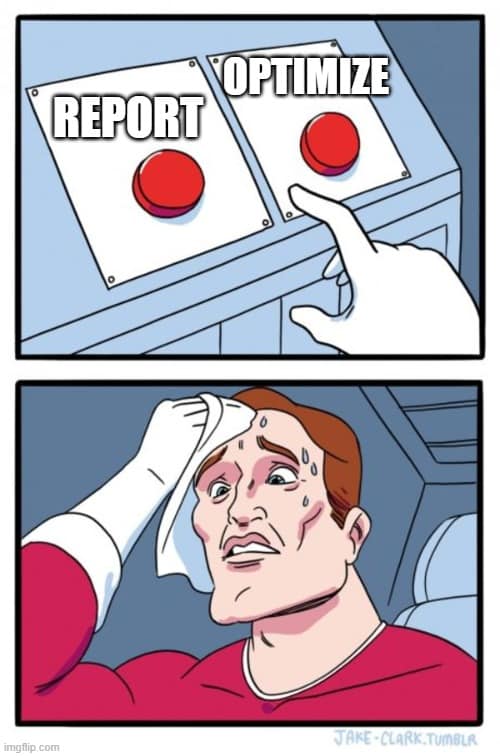 Get our ramblings right in your inbox

We deepdive into hot topics across digital marketing and love to share.

I’m sure you’ve heard of “the death of the cookie” by now. It’s hard to miss. Even people outside our industry are aware that times…

Many companies are confronted with huge amounts of data and the challenge to get the most value out of it for their marketing mix. In…

Adapting your campaigns for future revenue with Customer Lifetime Value

How we provided insights in the future revenue of our clients and how we are optimizing the campaigns.   Repeat purchase behavior At CLICKTRUST, we…